Exatlon tests the mettle of contestants with intense obstacle courses 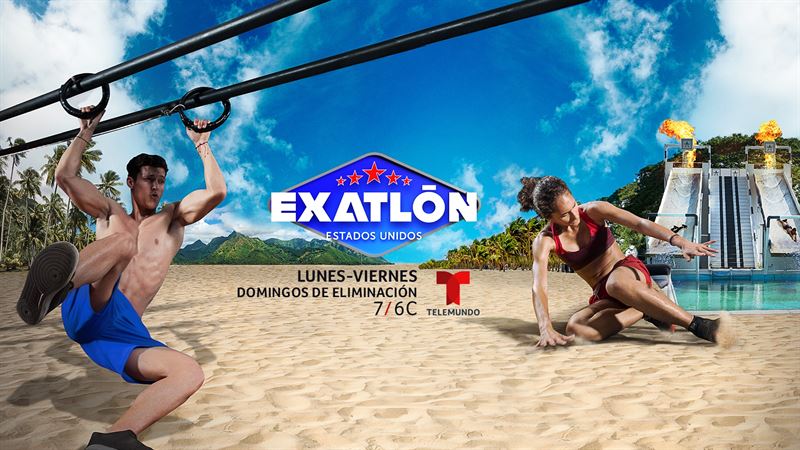 MIAMI, FL – November 21, 2019 – The third season of Exatlon, Telemundo’s hit reality, which has dominated its timeslot since it premiered, is coming to an end this Sunday, November 24 at 7pm/6c, when a new champion will be crowned after 14 weeks of nail-biting competition. As a preamble to the finale, the network will air “Exatlon: Rumbo a la Final” at 2pm/1c, recapping the best moments of the season, followed by a re-run of Friday’s semi-final episode at 4pm/3c. Exatlon audiences and fans can keep up with the latest news about the show by visiting Telemundo.com/Exatlon, and following Facebook.com/ExatlonEstadosUnidos, Instagram @ExatlonEstadosUnidos and Twitter @ExatlonTVEEUU.

Emotions will be running high during the exhilarating episode as the finalists compete one last time, and they reunite with their teams and family members, whom they have not seen since joining the competition over three months ago.

Mexican gymnast, Shaila Perez; professional soccer player, Norma Palafox; Mexican athlete, Denisse Novoa; bull-rider from Texas, Kelvin Renteria; the ‘king of obstacles,’ Mack Roesch; and, soccer legend from Mexico, Alberto “El Venado” Medina will compete one last time this Friday to determine which four contestants move on to the final elimination. The remaining four athletes will then go head-to-head on Sunday, in a series of obstacle courses to secure the title of Exatlon champion and take home the grand prize of US$200,000.

Exatlon, one of the most popular reality shows on Spanish-language television, splits contestants into two teams to compete in a series of physical and mental challenges over the course of several weeks. During their time on the show, the athletes are completely secluded from the outside world and social media. The family-friendly show is hosted by sports commentator, Erasmo Provenza, co-hosted by Colombian model, Jessica Cediel, and produced by Acunmedya for Telemundo.