More photos of Writers on the Verge
News
December 10, 2019

NBC WELCOMES ITS 2019-20 WRITERS ON THE VERGE CLASS

Graduates of Last Year’s Class Are Staffed on NBC’s “Council of Dads,” Among Other Shows on Top Networks 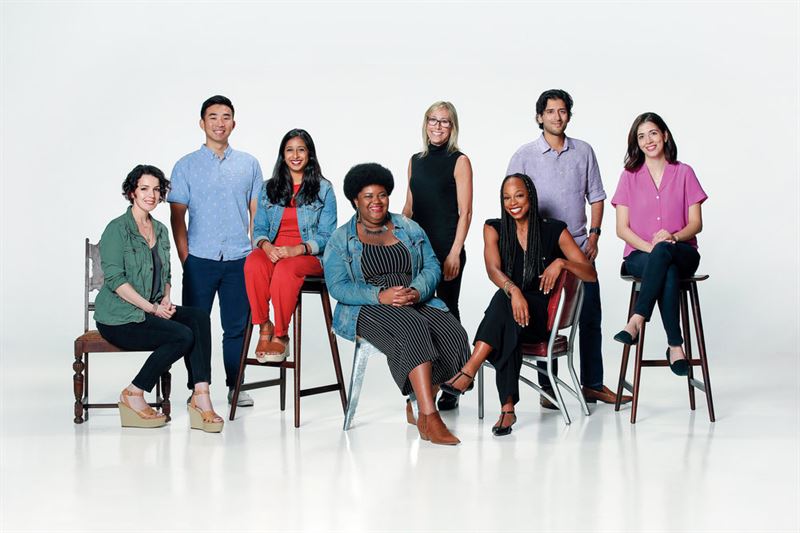 Now in its 14th year, Writers on the Verge provides talented writers, who are “on the verge” of breaking into episodic television, with a final polish to their writing and pitch presentation skills. The ultimate goal is for them to book a staff writing position on a television series after completing the six-month program.

Over the course of six months, the new class will develop pilot scripts and fine tune their pitching skills under the guidance of Grace Moss, Director, Talent Development and Inclusion, NBC and Jen Grisanti, a former CBS/Paramount and Spelling TV executive. Writers will also be paired with NBCUniversal programming executives who will serve as their mentors and provide feedback on their scripts and pitching prowess. They will also build relationships with network executives, showrunners and agents. At the end of the program, the writers will be considered for available writing assignments on NBC series.

RISHI CHITKARA
Rishi Chitkara is a first-generation Indian-American. After studying economics at Northwestern, he embarked on a career in entertainment, despite his immigrant parents’ well-intentioned wishes for him to pursue business, law, medicine or virtually anything else. He got his break as an office intern on “Superman Returns” and then worked in unscripted television production, with credits including “Are You Smarter Than a Fifth Grader.” He later ran production base camps as part of the DGA Assistant Director Training Program for scripted series, including “The Mentalist,” “Hello Ladies,” “Pretty Little Liars” and “New Girl.” Shortly after earning his M.F.A. in screenwriting from UCLA, he was accepted into the Writers Guild of America for developing his original action/comedy feature “codename: SANTA,” with Universal Cable/USA Network. Most recently, he completed the Dreamago Villa Ruffieux Writers Residency in Sierre, Switzerland and has independently produced two direct-to-video sci-fi/horror features, “The Sector” and “High Moon.” Believing that laughter is the greatest unifier, Chitkara utilizes his comedic voice to smash cultural stereotypes and champion the unexpected underdog. He is actively seeking representation.

ANDI DELOTT
Andi Delott writes grounded female-driven stories. Her screenplay was a 2019 finalist in the Blacklist/Women in Film Episodic Lab and a 2019 semi-finalist at the Austin Film Festival. Her feature scripts were awarded a 2018 PAGE Awards Fellowship to the Stowe Story Labs and accepted into the 2017 New York Women in Film and Television Writers Lab. She graduated from UCLA’s Professional Program for TV Screenwriting in 2019. She is currently a partner at an entertainment advertising agency in Los Angeles where she helped successfully brand, launch and sustain multi-year marketing campaigns for TV series, including “Lost,” “Desperate Housewives,” “Grey's Anatomy,” “Dancing with the Stars” and “Modern Family.”

MAYA HOUSTON
A queer black woman raised by a single mother in Atlanta, Maya Houston graduated from the University of Southern California in 2016 with a B.F.A. in writing for screen and television and a minor in occupational science. Shortly after graduating, she caught the attention of Issa Rae after winning the Project Greenlight “New Normal” contest and worked under the leadership of Rae to create a digital series called “Minimum Wage” about a struggling Koreatown burger joint that must make radical changes to keep its doors open. Houston currently works as the writers’ production assistant on the CW’s ”Arrow” where she recently got her first television writing credit for an episode that will air later this season. Houston is represented by Zero Gravity Management.

MITALI JAHAGIRDAR
Mitali Jahagirdar is an Indian-American writer based in Los Angeles. An Orlando, Fla., native, she previously served as a litigation paralegal in New York City before transitioning to film and television writing. In 2017, she received her M.F.A. in screenwriting from UCLA, and since then her mystery thriller and sci-fi/fantasy voice has earned her the Alfred P. Sloan screenwriting grant and the CAPE New Writers Fellowship. Jahagirdar was previously the writers’ production assistant for Amazon’s “The Expatriates” and is currently the script coordinator on the CW’s “Dynasty.” She is represented by 3 Arts Entertainment and McKuin Frankel Whitehead, LLP.

LIRA KELLERMAN
Lira Kellerman has over two decades of experience as a professional actress and plays recurring villain Sinead on “The Young and the Restless.” Her acting technique book, “Break the Rules and Get the Part,” was published by Applause Theatre & Cinema Books, and her essays have been featured in publications that include New York magazine, InStyle and Dame. She hoards bad Dad jokes, loves lame puns and is a writing alumna of the CBS Diversity Sketch Showcase, so naturally, she writes very serious one-hour dramas.

SHANI AM. MOORE:
Shani Am. Moore says that having multiple sclerosis is one of her greatest strengths. Another is her family roots: a second-generation Jamaican immigrant, she grew up in a small home in the Bronx with nine other people. Yet another power source is her education as she earned degrees from Princeton, UC Berkeley and Stanford Law School. A reporter before becoming an attorney, she discovered screenwriting as a production lawyer at NBC. Currently, when she’s not writing, she is Head of Legal for Cinema & Marketing at Dolby, where tech empowers creativity. She is represented by Bellevue Productions and Kaplan Stahler.

SHIRIN NAJAFI
Shirin Najafi grew up in Northern California and graduated from Columbia University with a B.A. in economics. She worked in finance in New York for a couple years before disappointing her Persian immigrant parents and deciding to pursue a career in screenwriting. She wrote for the 2014 CBS Diversity Sketch Comedy Showcase and has since written and directed comedic videos and web series that have been featured on Funny or Die and covered by news outlets that include Huffington Post, Los Angeles magazine, Uproxx and Slash Film. Her satirical web series “Untidy,” co-created with Amy Vorpahl, was distributed on Elizabeth Banks’s digital comedy platform WhoHaha. In 2019, Najafi returned to the CBS Diversity Showcase and was hired as one of 11 writers in the showcase’s inaugural writers’ room. For a short time, she was possessed by a desire to do standup and performed in clubs, including the Comedy Store and Hollywood Improv, opening for comedians Iliza Schlesinger, Helen Hong and Michael Kosta.

MIN-WOO PARK
Min-Woo Park grew up in Southern California and attended Harvard University, where he studied English and rowed on the varsity crew team. He has mixed feelings about one of those decisions. After college, he spent several years working as a copywriter at a top New York advertising agency, creating award-winning campaigns for Foot Locker, AT&T and Snickers. A 2019 CAPE Fellow, Park writes comedies about diverse characters that use their heart and hustle to subvert expectations. He is represented by Good Fear.

ABOUT WRITERS ON THE VERGE (NBC TALENT INFUSION PROGRAMS)
Founded in 2005, Writers on the Verge is an annual program that equips talented, emerging writers of diverse backgrounds for staff writer positions on scripted television series. During the six-month intensive program, participants develop pilot scripts and learn how to effectively pitch their ideas under the guidance of television executives. At the end of the program, they are considered for available writing assignments on NBC series.

ABOUT THE NBC TALENT INFUSION PROGRAMS (NBC TIPS)
Since 2000, NBC has been dedicated to discovering and nurturing on screen and behind-the-camera talent of diverse and inclusive backgrounds through the NBC Talent Infusion Programs (NBC TIPS). NBC TIPS are amongst the most extensive and robust diversity and inclusion programs in the television industry. They feature more than 20 programs including Writers on the Verge, the Diverse Staff Writer Initiative, Female Forward, the Emerging Director Program and StandUp NBC, a nationwide search for stand-up comedians. Program alumni are celebrated producers, writers, directors and actors in the entertainment industry who have gone on to win Emmys, Golden Globes and SAG Awards and include Alan Yang, Mindy Kaling, Deon Cole, Lil Rel Howery, Keto Shimizu, Natasha Rothwell, Danny Pudi and Danielle Sanchez-Witzel. For more information, visit NBCUniTIPS.com.