Boxeo Telemundo Relives the Boxing Stars’ Most Memorable Bouts Throughout the Series, Their Stories and Impact in the Sport; Saul “Canelo” Alvarez, Wilfredo "Papito" Vázquez Jr., and Orlando Cruz Among Fighters Featured

The Four-Week Special Season Premieres this Friday, May 1 at 12 a.m. ET with a Look at the Best of Classic Bouts Featuring Puerto Rico vs. Mexico 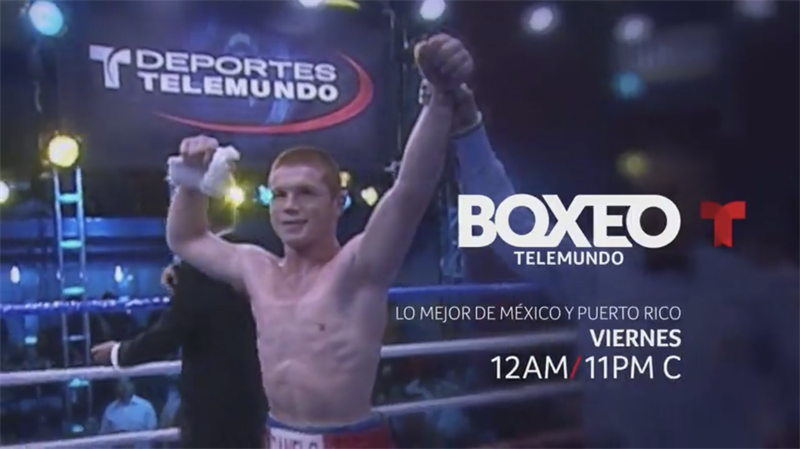 Miami – April 27, 2020 – Boxeo Telemundo, the #1 Spanish-language boxing program in the U.S., returns with a special encore presentation featuring iconic bouts that launched the careers of champions and notable fighters who have left an indelible mark on the sport, highlighting their stories and rise to stardom. The special four-week season premieres this Friday, May 1 with a look at the best of the classic Puerto Rico vs. Mexico. Week two will present the rise of Wilfredo “Papito” Vazquez Jr., followed by the story of Orlando “El Fenomeno” Cruz and culminating the season with a special highlighting the beginnings of 4-division champion Saul “Canelo” Alvarez.

Boxeo Telemundo will be broadcast on Telemundo and streamed on the Telemundo Deportes app with additional extensive news and content on TelemundoDeportes.com, including the fighters’ best moments following each episode.

The special edition of Boxeo Telemundo will be hosted by veteran boxing expert and Florida Boxing Hall of Famer Rene Giraldo, alongside Edgar Lopez. The show will relive the best bouts around each story featuring special commentary from the experts to provide viewers with insights and anecdotes. Each episode will also incorporate featured interviews with some of the boxers including Alejandro “Payasito” Hernandez, Jonathan “Bomba” Gonzalez and Orlando Cruz, in addition to behind the scenes anecdotes and stories from the on-air talent.

This Friday’s season opener, the classic Mexico vs. Puerto Rico, two of the most potent Hispanic boxing nations in the world, is highlighted by two contemporary contenders on the eve of their World Title shots. Mexican fighter Alejandro “Payasito” Hernández took on Marvin Mabait back in March 28, 2014 that led him into the unforgettable bout against Tomoki Kameda for the WBO Bantamweight Title in November 2014. This fight was seen by many as a contender for upset of the year in 2014.The classic Mexico vs. Puerto Rico will also take viewers back to February 18, 2018 when Puerto Rican fighter Jonathan “Bomba” Gonzalez squared off against Mexican Ricardo Meserito Gonzalez who took the vacant Flyweight Title NABO OMB via a tough split decision. Gonzalez went on to fight for WBO Flyweight title in August 2019 vs. Kosei Tanaka. The fight was seen by many as a contender for fight of the year in 2018.

Boxeo Telemundo will continue its featured encores on Friday, May 8 with the story of Wilfredo "Papito" Vázquez Jr. and the road to his world title shot.

Debuting in 1989, Boxeo Telemundo has grown to become the #1 combat sports program in the U.S. among Hispanics, across broadcast and cable landscape. Since its launch, Boxeo Telemundo has broadcast over 350 title fights, showcasing some of the biggest boxing stars as they rose to stardom and won their first championship titles, earning a reputation as the show “where champions are born." Among these stars is Saúl Canelo Alvarez, who won his first pro boxing title on Boxeo Telemundo in 2008. Other notable Champions featured include  Juan Manuel Marquez,  Diego Corrales, Carlos Maussa,  Floyd Mayweather,  Israel Vázquez,  Wilfredo Vázquez,  Rafael Ruelas,  Jorge Solis and many others. In addition, renowned boxing Hall of Famers have also appeared on the show including  Erik Morales,  Marco Antonio Barrera and  Felix Trinidad.