Becky G will also perform during the “Latin AMAs” slated for October 17 at the Dolby Theatre in Hollywood, California 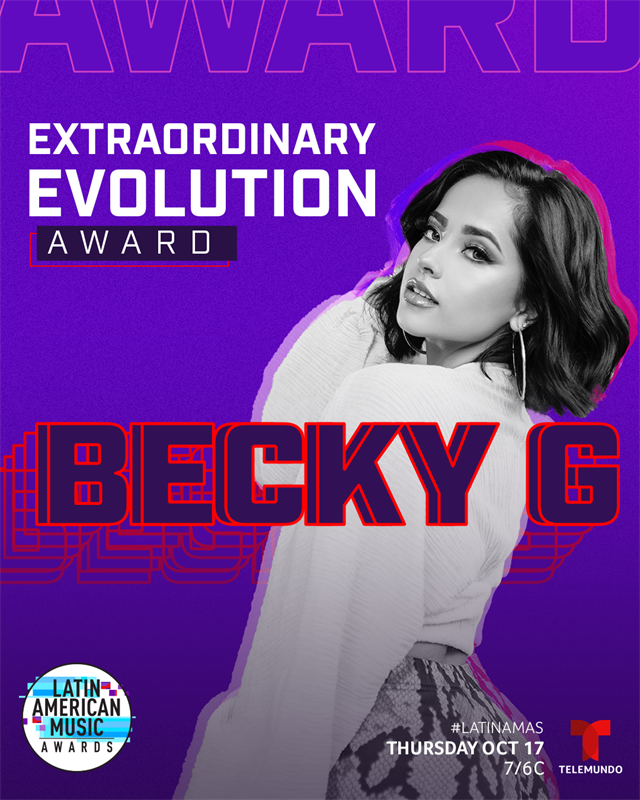 Los Angeles, September 17, 2019 – International star Becky G will be the recipient of the Extraordinary Evolution Award during the fifth edition of the 2019 “Latin American Music Awards.” The awards show will take place October 17th at the Dolby Theatre in Hollywood, California, and will be broadcast live on Telemundo. Tickets to the awards show are on sale via Ticketmaster and the Dolby Theatre box office.

The Mexican American artist, who won two “Latin American Music Awards” in 2018, will be honored for her success as a young performer who has demonstrated change and accelerated growth as an artist, reaching the pinnacle of success in a short period of time. The first Extraordinary Evolution Award was presented to Colombian singer Maluma, last year.

Born for the spotlight, the 22-year-old singer, songwriter and actress, has had an impressive career since 2011, when she gained notoriety by posting her cover song videos, which catapulted her to fame and a clear place among up-and-coming artists.

Becky G’s multifaceted career is shaping up to be nothing short of iconic. The twenty-two-year-old international singer’s achievements include two No. 1 hits on the Billboard Latin Airplay Charts (“Mayores” & "Sin Pijama”), a starring role in "Power Rangers", and guest-starring in Fox TV’s Emmy-award-winning “Empire" series.

Facebook and Instagram Posts: International star @IamBeckyG to receive the @Latin AMAs Extraordinary Evolution Award for her demonstrated change and accelerated growth as an artist, to reach the pinnacle of success in a short period of time. #BeckyG will also be performing at the show on 10/17 to be broadcast LIVE from the @DolbyTheatre on @Telemundo. #LatinAMAS

Twitter Post: International star @IamBeckyG to perform and receive the @LatinAMAs Extraordinary Evolution Award. The #LatinAMAs will take place 10/17 and will broadcast LIVE from the @DolbyTheatre on @Telemundo.

For the latest news, be sure to follow the “Latin AMAs” on social media and join the conversation by using the official hashtag #LatinAMAs.

NBCUniversal Telemundo Enterprises is a world-class media company leading the industry in the production and distribution of high-quality Spanish-language content to U.S. Hispanics and audiences around the world. This fast-growing multiplatform portfolio is comprised of the Telemundo Network and Station Group, Telemundo Deportes, Telemundo Noticias, Telemundo Global Studios, Universo and a Digital Enterprises & Emerging Business unit. Telemundo Network features original Spanish-language entertainment, news and sports content reaching 94% of U.S. Hispanic TV households in 210 markets through 28 local stations, 51 affiliates and its national feed. Telemundo also owns WKAQ, a television station that serves viewers in Puerto Rico. Telemundo Deportes is the designated Spanish-language home of two of the world’s most popular sporting events: FIFA World Cup™ through 2026 and the Summer Olympic Games through 2032. Telemundo Global Studios is the company’s domestic and international scripted production unit including Telemundo Studios, Telemundo International Studios, Telemundo International, as well as all the company’s co-production partnerships. As the #1 media company reaching Hispanics and millennials online, the Digital Enterprises & Emerging Business unit distributes original content across multiple platforms, maximizing its exclusive partnerships with properties such as BuzzFeed, Vox, and Snapchat. Through Telemundo Internacional, the largest U.S.-based distributor of Spanish-language content in the world; and Universo, the fastest growing Hispanic entertainment cable network, the company reflects the diverse lifestyle, cultural experience and language of its expanding audience. NBCUniversal Telemundo Enterprises is a division of NBCUniversal, a subsidiary of Comcast Corporation.